Difference between revisions of "2003 Server"

2003 Server is often portrayed as being half-girl, half-fish, with an ethernet hub as a bonnet on her head. Other versions show her as a girl with a short white skirt and a vest-style top with a long tail in the back (usually with a bow) and Windows four-square logo pins in the bow at her neck and on the tail (as shown in the pic in the infobox). In some forms, she has a belt made from ethernet cable wrapped around her waist. Saba is a pun: in Japanese, the word for server is pronounced "saabaa", while "saba" is the word for mackerel. The more common design is the half-girl half-fish version. 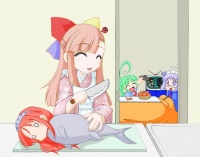 Saba-tan on the chopping board by an oblivious 95-tan, and ME-tan isn't very good at Tetris either.

Saba-tan is constantly being eaten by cats (As another gag of the fact that she's a fish), also in one episode, Windows 95 is seen cooking Saba-tan for lunch, she has been gutted, stunned, and placed on a cutting board as 95 is seen with a sharp knife, preparing to chop Saba-tan up and cook her for ME and 2K to eat. It is still unknown how she escaped that situation since she was unconscious while 95 held the knife up ready to chop her up.

Also in the picture of all the OS-tans, she is seen becoming a cats lunch, however she returns in a later comic, indicating that she somehow escaped being eaten for lunch, or the fact that there are many Saba OS-tans in the OS-tan universe.

Some time after this character was made, OS-tans for Windows 2000 Server and 2008 Server have been made, following the same design cues as 2003 Server. The three of them are often seen together, but 2003 Server is the most common of the Saba-tans.